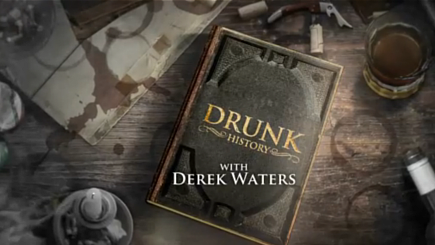 Derek Waters returns to Comedy Central to host the third season of the show that retells true moments in history from a skewed perspective. Guest hosts hang out to retell interesting moments in American history and highlight significant people and places.

The 30-minute show re-enacts fragments of events being told as the stars break down their versions of the story. While enjoying their favorite drinks, viewers watch as the storyteller begins to slur. Soon the facts become less reliable and more hysterical.

This series is written and directed by Derek Waters and Jeremy Konner, seasoned director for television and film.

“The order of the shows come as we have researchers come in to pitch Jeremy and I the best stories that they’ve found,” said Derek. Cities are selected based on how they would best fit the stories told. Narrators that are already known and are familiar with the stories are pitched the selection and choose what stories they’d like to tell.

Stories come from all over the place.

“He’s who the Lone Ranger was based off of and he was a black guy,” said Derek, “but our country didn’t like that so we just put a mask on him… The good thing is we’re making a comedy show because nobody knows what actually happened unless you were there. But it is interesting to find different pictures, whether it would be like actual diary entries from the specific people we’re covering…” said director, Derek Waters.

Season three has 13 episodes and 39 new stories to share with its audience. Some of the combos to look forward to this year include Octavia Spencer as Harriet Tubman, Josh Hartnett as Clark Gable, and Will Ferrell as Roald Dahl.