Only six opportunities are available to witness this performance like no other, starting tomorrow evening. The art of script writing for stage and theatre acting has evolved with the evolution of media allowing performance art to be witnessed with the stroke of our fingertips. Seriousness of content and well desired performances that are worth repeating have become scarce over the past decade as the old is somehow made new while nothing new is actualized. TA 489 is a production and performance class that has challenged students to really think about what is important to them and to the society they live in. Allowing students the opportunity to express themselves in ways they never thought possible, six students have come together to transform their individual narratives into a performance like no other.

The main question of “Who the hell are you?” was the topic starter for finding reason to pursue the artistic endeavor. Stereotypes of the young adults starting out in the world claim that these new found members of society are a self-involved generation not showing interest in society and everyday happenings of the world beyond their cell phones or iPads, so the question of “what do you care about” as individuals became true motivation.

“They wrote it. They’re acting in it. All elements of production and marketing were conducted by the students themselves. It’s been a fairly easy and fun process,” said Professor Marcos Martinez, the production’s director.

Nicolas Sandoval, Olivia Battle, Brandon Kennedy, Christine Dillard, Caroline Floto and Taylor Mu’min are VPA and theatre majors that poured their deepest contemplations into a tell-all script that has been brought to life with the help of Ryan Michael, Lana Cook and various other students enrolled in the course.

“This has been my first time getting involved in theatre involving cultural awareness: straying away from entertainment for the sake of “entertainment,” not just what I can’t see, but also what I wouldn’t see. The human way of social ignorance and the path of least resistance,” said Brandon.

The issues being addressed in this performance are concerns that our present day social structure will not allow us to verbalize and actually hold discussions over. There is no longer room for grey areas or true freedoms of speech and personal perspectives. Rather, the proper thing to do is keep these thoughts and ideas to ourselves in order to keep from having to create conflict or place ourselves in uncomfortable situations because standing up for individuality is “not okay.”

“This has been a bitter sweet experience. Marcos really dug the scene writing experience out of us. Seeing the work progress is mind blowing,” said Nick.

Risking Our Forbidden Narratives covers the taboo, “Things that people we know and love would never expect us to say or think,” said Olivia Battle, senior theatre major.

“Stories you never thought you’d share,” said Caroline, “I’m excited about having written our own work because I don’t think that perspectives are seen, especially in North County, as most theatre productions in this area are written by and for affluent Caucasian adult perspectives rather than the youths. We have stories that are compelling and unique that you will not see anywhere else.”

Inspirations for this play came from Roberto M. Cossa’s La Nona and iTunes RISK! at https://itunes.apple.com/us/podcast/risk!/id334724074?mt=2 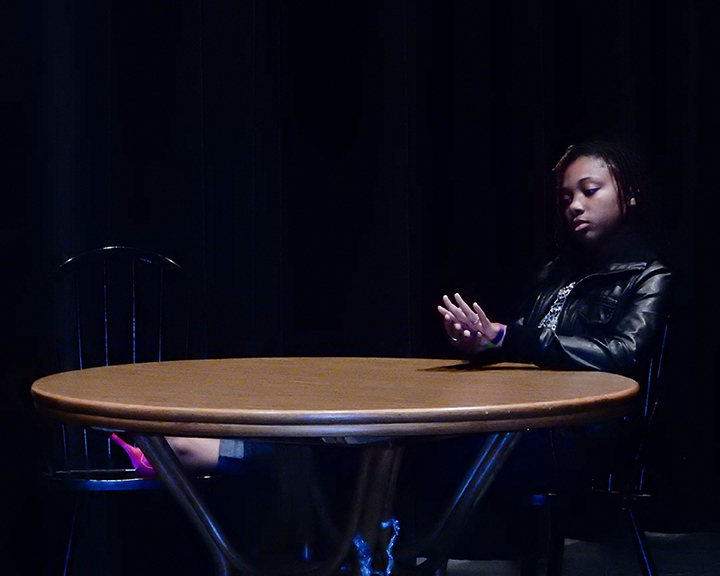 Becoming a part of a performance like this has been a great opportunity for the students involved. “Someone gave us a chance to really write how we feel,” said Christine. Taylor Mu’min had addressed the fact that this experience is one that she will carry with her for the rest of her life. As a Black 19-year-old lesbian, she has been given the opportunity to truly address her individuality with the world and show that her struggles in life and what she has to say about them are relatable to everyone. Regardless of race, gender, social status, creed or sexual preference, there is a part of this show that will give you goose bumps and speak to your core. Taylor is a theatre major and hopes to become a teacher in the art form and help to influence students in their goals, much like Professor Martinez, in aiding individuals in finding their paths to success.

Being that the performance is comprised of various narratives put together by these six individuals, there are more than 10 characters that are portrayed throughout this hour and 15 minute performance. Ryan Michael was honored to take on the task of lead costume designer. “This has been the most challenging in terms of costuming. It’s been very fun, hectic…a challenge but also rewarding in the same respect and I’ve gotten to meet a wonderful group of people.”

While watching rehearsals, I got to witness the actors warming up by using the Suzuki Method of Actor Training, developed by Tadashi Suzuki of Japan. This preoperational exercise is an advanced method of finding center of gravity and honing one’s presence. The discipline that this practice demands helps the performers to find their balance, organization and verbal resonance. As I sat in the audience waiting for the actors to work through the exercises, I could feel the air in the room become more dense, as though empty space was being filled with permeating energy that was swelling from the six bodies in motion. As they stood still the calm of the room encapsulated the energy.

Tickets are still available at csusm.edu/sofa/events/. Students, faculty and staff can purchase tickets for $5 and tickets are available for the general public at $10. Remaining performances are Nov 13, 14, 15, 20, 21 and 22 at 7 pm in Arts 101 located at the new School of Arts in California State University, San Marcos.